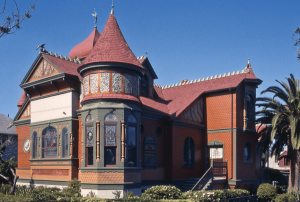 Architecture that seems wildly out of place, the Villa Montezuma Museum is a Queen Anne-styled mansion that sits on the outskirts of San Diego. Built for Jesse Shepard in 1887, this historical landmark is believed by many to be the city’s most haunted of abodes.

Shepard, an English composer, pianist, and writer, lived in the house for only a year before relocating to Paris. He sold the property less than a year later. After nearly a century, the city of San Diego purchased the great construct to use as a museum.

Why would Shepard sell off his prized mansion so quickly, and why does it rank so highly among paranormal investigators as being so haunted? Read on to delve into the mysteries surrounding the Villa Montezuma Museum. 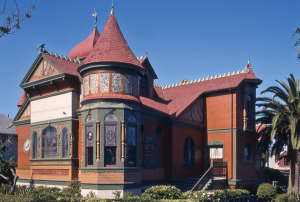 Just looking at this grand monstrosity and its interior will give you the sense that Shepard had some strange fascinations. Stained glass windows line the home, statues of gargoyles are perched throughout, and no less than five fireplaces can be found inside.

Shepard had a tower built that he used for his study, with the entire east wing set aside for music. Attached to that was a conservatory to serve in further expanding his love for music, where he regularly practiced playing instruments and writing pieces.

The first floor was comprised of not only his music rooms but also master and guest bedrooms. The second floor was built for displaying his many unique gifts that he had been given from European nobility over the years. Shepard very much prized these priceless artifacts and loved to show them off to guests who visited or stayed at the villa.

Going deeper below the mansion was a full kitchen and an area built solely for his servants to work and prepare his daily meals.

Each room within his home had its own specific look and feel, with extravagant color schemes used to set the tone that he desired. Most interesting are the alleged secret passages that were said to be constructed within. Fireplaces would reveal hidden alcoves behind them, and nearly every room had concealed doorways that would lead to other parts of the mansion.

Due to Shepard’s affluent lifestyle, he had many connections that would eventually serve to draw the attention from those interested in the otherworldly. He soon found himself holding séances in his home with spiritualists near and far.

Shepard would often play music during these séances, believing that he had the power to open a line of communication with the dead. Many believe that he was successful in his attempts to contact spirits from the other side.

Passersby on the streets below frequently attested to hearing full orchestras playing during his séances. What is most baffling is that it was later realized that he was all alone in his home at the time! How Shepard could have conducted a full arrangement is up for debate, but many believe it was the result of a successful séance that brought long-dead composers back for a session.

Further confounding is that Shepard claimed to be able to speak to the spirits of Mozart, Beethoven, Chopin, Shakespeare, and even Julius Caesar. If true, this would validate the reasoning as to why people on the streets heard full orchestral sets in Shepard’s lonesome.

So musically inclined was Shepard that witnesses have claimed that he could play the Grand Egyptian March using only his voice and a piano.

Several spiritual entities are said to regularly haunt the Villa Montezuma. While the details on the who and why are scarce, one such ghost is thought to be that of a gentleman who hanged himself from the second floor observatory. It is possible that this was one of the later owners of the mansion, as it had changed hands numerous times.

Multiple eyewitnesses have attested to seeing an apparition hanging from the very same observatory where the unnamed man committed suicide long ago.

As an interesting side note, none of the villa’s numerous owners had ever found success while living in it. Each faced severe financial ruin and was forced to sell the home to someone else. It’s rumored that the Villa Montezuma had a curse placed on it that guaranteed the decline of all who dared to live there.

A poltergeist thought to be that of Shepard himself can often be heard playing the piano in the dead of night – even when no one is home!

Tourists who have visited the villa serve to confirm the eerie atmosphere that permeates the massive estate. Many of whom have said that they’ve seen ghostly figures lurking in the stained glass windows.

One in particular that seems to get the most activity is that of a window depicting Flemish artist Peter Paul Rubens. In this window, his face has a beard that can be seen graying more and more with each passing year.

And while the entire villa’s yard is now filled with beautiful gardens, flowers, and hedges, there is one certain corner of the house where vegetation inexplicably refuses to grow.

What is most interesting about the alleged haunting of Villa Montezuma is the manner in which Jesse Shepard died. On an evening like any other, Jesse Shepard was entertaining guests along with his roommate Lawrence Tonner.

Shepard was playing the piano on this particular night, and upon striking the last key to finish the piece, he died. No one had even noticed for a few moments. When Shepard was unresponsive to their adulation, Tonner went over to find that his friend was completely frozen with his hands still on the piano keys.

In the final years of his life, Shepard had lost most of the popularity that he had once garnered from admirers of his music and writings. Perhaps as a result of the alleged curse that the Villa Montezuma had placed on it, he also lost all of his money and was living in abject poverty for a time until his friend Lawrence Tonner came along to keep him afloat.

Having traveled the world together for many years, Tonner felt indebted to his lifelong friend and supported Shepard in his last years of life by working in a tailoring shop and teaching French. Jesse Shepard died in Los Angeles on May 29, 1927 at the age of 78.

Years later, in 1969, the Villa Montezuma was purchased by the San Diego History Center with the goal of transforming the large estate into a museum and cultural center. After opening on November 12, 1972, a volunteer organization came along known as Friends of Villa Montezuma that served to assist in maintaining the mansion.

So successful was this venture that the Villa Montezuma played host to hundreds of weddings over the years, serving to provide a steady source of income for the historical society. Unfortunately, in 1986, a fire broke out on the second floor that caused extensive damage, destroying over half of its roof.

It would take over a year for the damage to be fixed, but when it finally was completed, the museum was able to reopen to the public – just in time for the Villa Montezuma’s 100th anniversary. Sadly, a declining economy and worsening foundation forced the museum to close down.

In recent years, the Friends of Villa Montezuma society raised enough funding to start restoration on the massive estate so that people could once again appreciate the villa’s rich history. Its foundations have been fully restored, along with its roof and chimneys.

Today, the Villa Montezuma Museum is open to the public every quarter to visitors who first register with the San Diego Parks and Recreation Department. Free tours of the mansion are given four times a year to all who wish to attend, ensuring that a new generation can come to learn of the Villa Montezuma’s unique history.