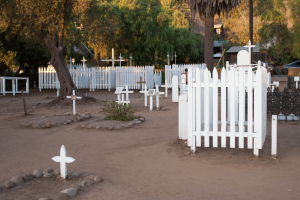 San Diego is a city the home of more than one million people. Before that, it was one of the oldest colonies in North America founded in 1542 by the Spanish explorer Juan Rodriguez Cabrillo. This set the stage for what might have led to the inception and formation of California some three centuries later. Today, it is a vibrant community that sits near the Pacific Ocean with a military presence of our nation’s Marines and Navy. While the Padres and the Ron Burgundy references might reign supreme in this city, some others (of the spiritual kind) might beg to differ.

San Diego is home to some pretty interesting hauntings. Visitors and residents of this city have often told accounts of presences and some ghost sightings throughout the city. While there might be a lot of them, there are ten that will be the main focus here. Once you’re done reading this list, visions of the beach may not be dancing through your head. It just might be visiting a few haunted places that could be the plan instead. With that in mind, here we go: 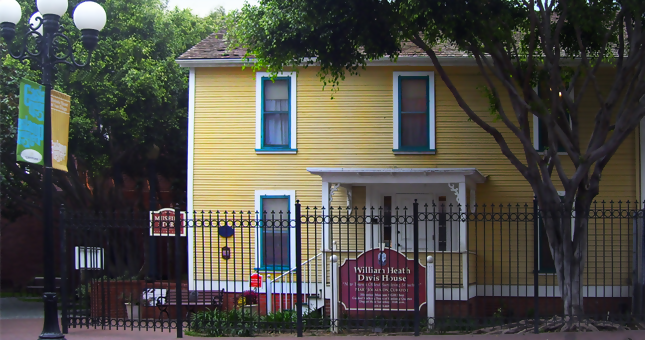 Located in the famous Gaslight District area of the city, the house was established in 1850. It is considered to be one of the oldest landmarks in San Diego’s downtown area. The house served as a hospital for many decades. At a time when medical technology was non-existent, procedures were done by primitive means. Since it was a hospital, you can bet that many deaths have occurred here (untimely or otherwise). So it might be no surprise if you happen to feel some spirits roaming about inside the house or on the grounds.

However, there is a specter that might be hanging about in the house other than the departed patients of ages past. It was rumored that a German spy was said to have taken up a residence here at the height of America’s involvement in World War II.

Even before the discovery of electricity, some visitors to the house would often see the lights from candles flicker out suddenly. Other incidents include closed medicine cabinets being open the following morning and even the sight of a Victorian-era woman lingering around in the halls. 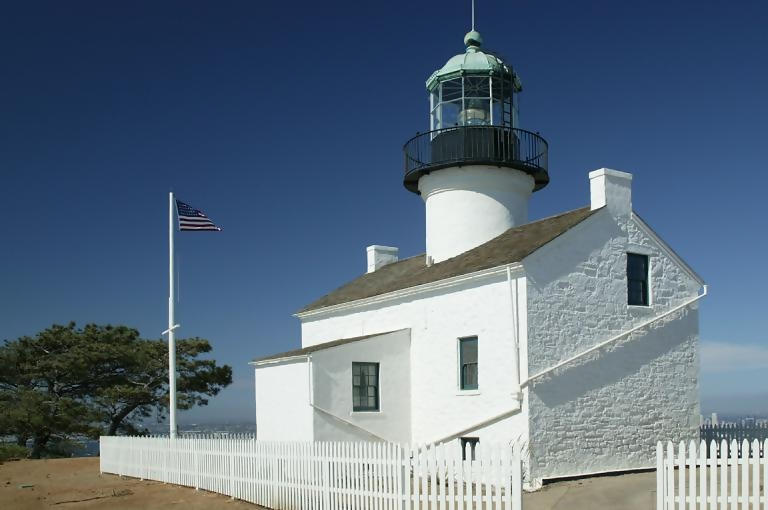 As with the purpose of all lighthouses, the Old Point Loma Lighthouse served as a beacon for ships sailing the Pacific. It was in use for nearly 40 years until a new lighthouse was built on a new location. The new lighthouse sat on much higher land so the light would not be obscured by heavy fog.

Among the spirits that might be shuffling around in this lighthouse may include some of the early Spanish settlers that have landed here in the 1540s. One of those might just be the specter of Juan Rodriguez Cabrillo. Another specter that might be hanging around might belong to Captain Robert Decatur Israel. Israel was a longtime caretaker of the lighthouse until his death. Even in the afterlife, it seems that he still takes on the responsibility of watching over his lighthouse while many from all over check it out and learn the story of its past.

Don’t be surprised if you hear any footsteps, moaning, groaning, or get the chilling feeling that someone (or something) is watching you very close by. 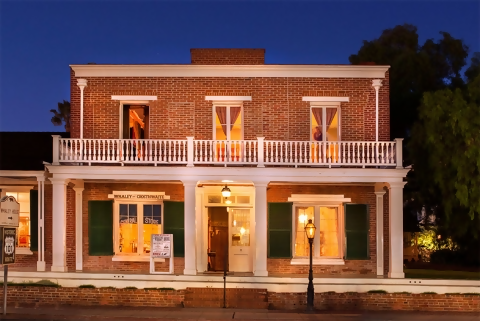 The Whaley House might be perhaps the most haunted places in the entire city of San Diego (if not, the entire country). Even some paranormal and ghost fanatics that live hear will never leave out of this place when they talk about hauntings. There are a few good reasons why this place might one of the most haunted places in America. Many have died here by their hand or other gruesome circumstances. Believe it or not, those who have visited this place are likely unaware of the ghostly presences that reside here in the hallowed halls.

The Whaley House wore many hats throughout its history. It was a local courthouse, then a general store, and a theater to name a few. But how did the Whaley House get its name? It was owned by Thomas Whaley, a businessman who had built a general store at the height of the gold rush. After a fire gutted his San Francisco store, Whaley and a business partner ventured down to San Diego to set up a shop that served the local Native American tribe, the Kumeyaay.

Whaley’s daughter Violet committed suicide by way of a self-inflicted gunshot wound after going through a divorce. Her death occurred here at this house, which would also explain why her ghostly presence might also be known here.

If you think high seas hauntings are for pirate stories, think again. The Berkeley Ferry is part of the San Diego Maritime Museum. At the height of the Gold Rush and California’s acceptance into the Union, this passenger ferry was said to carry up to 2,000 passengers that would ferry them throughout the San Francisco Bay Area and points south. In 1911, an explosion occurred on board injuring five people and killing one. That one death was a man named John O. Norbom. It is said that Norbom’s spirit might be still on board. Some have also said that it might have been a regular passenger that may have died while en route to some location.

Other reports have included footsteps and even a bathroom stall that somehow locks itself. During the great 1906 Earthquake and Fire of San Francisco, this ferry was used to rescue those fleeing from the disaster. While it may be a matter of dispute, other spirits may also be those who have perished in one of the greatest disasters in American history. 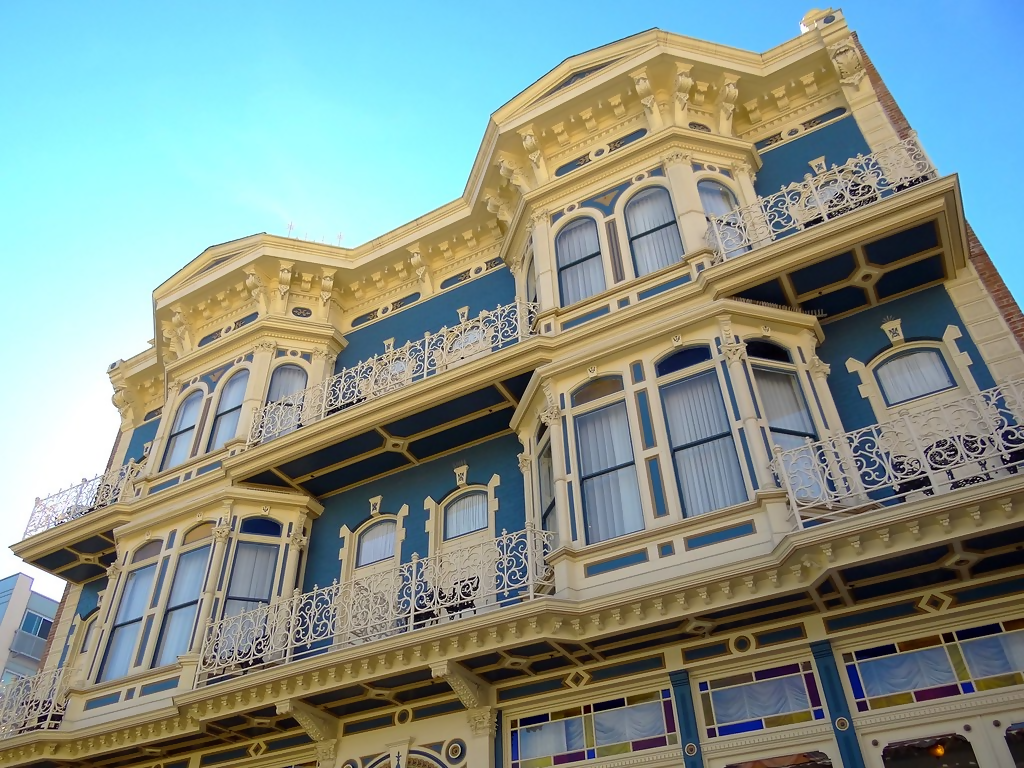 Even after death, those who were guests at this hotel built in the 1870s are still around. One such guest was a gambler named Roger Whittaker. His unpaid debt would soon lead to his demise as the collectors managed to track him down and shoot him to death while he was hiding in a closet. It’s been said that the shooting occurred in room #309. To this day, it might be where Mr. Whittaker continues to overstay his welcome.

Guests who have stayed here in the past have often seen the flickering of lights, doors opening and closing, and footsteps. While Mr. Whittaker may not be the only apparition hanging around, it could be the guests who might have departed during their stay here as well. The hotel was slated to be torn down in the 1970s but was purchased by the city and renovated well into the 1980s. Today, it is one of the most popular hotels in the city visited by those who want to take in the sights of the city. However, will they ever know that something from the other side might still be checking in long after they’ve “checked out”? 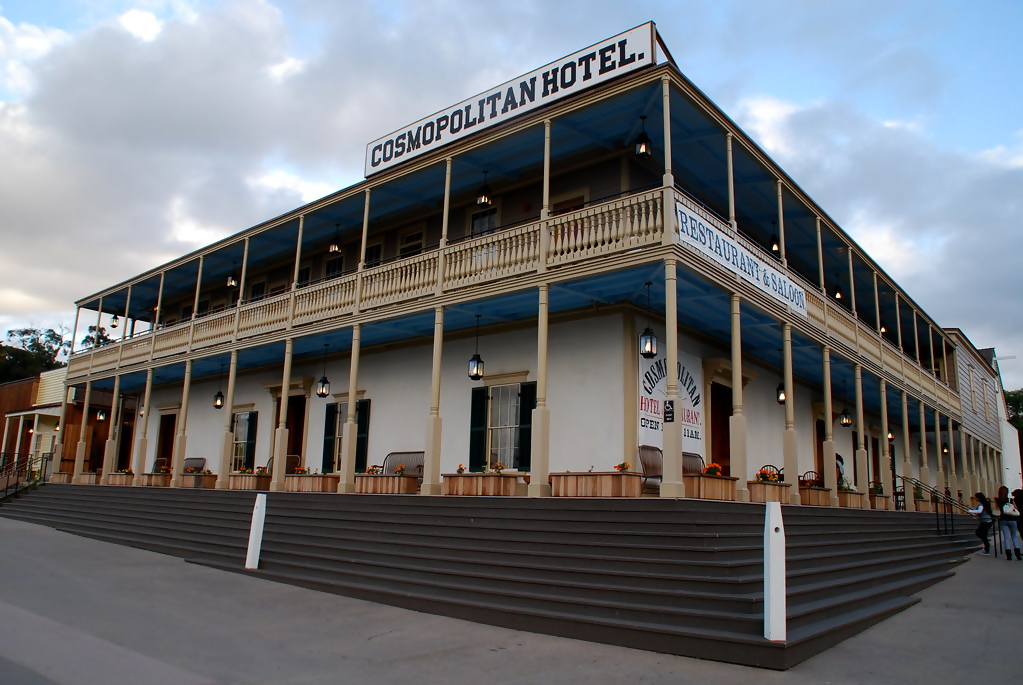 If you think the Horton Grand Hotel is the only place where the spirits of San Diego are taking up residence, consider yourself mistaken. Not far from the Horton is the Cosmopolitan Hotel. One of the possibly famous spirits that are said to have haunted the halls and rooms was that of Ysidora Bandini, the youngest daughter of the hotel’s founder Juan Bandini. It was said that she fell to her death during a parade in 1846. She was said to have taken up residence (or still does) in Room 11 of the hotel. Some have reported having seen lights flickering and even some noises that might just be Ysidora causing some kind of trouble and spooking the guests.

Before the elder Bandini established the hotel and restaurant, it was his residence. To this day, it has become one of the most popular destinations in San Diego’s Old Town neighborhood. 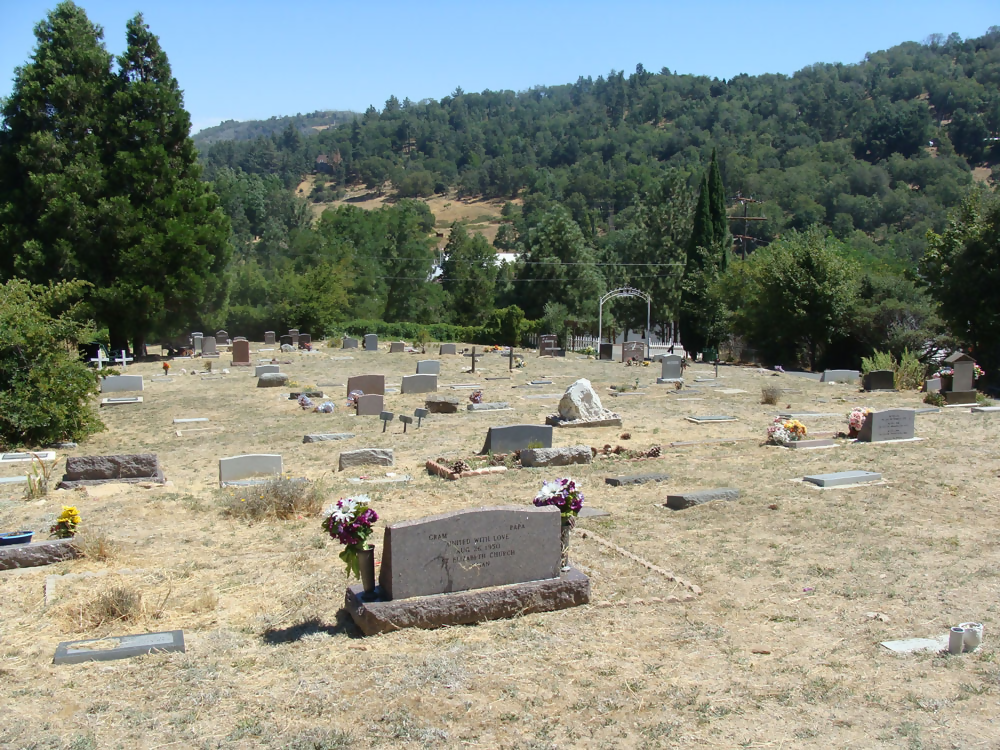 Of course, you’ll find a cemetery to be the hotbed for some spiritual activity. Ghosts in the graveyard might sound like some cliché. But sure enough, this is the place where many prospectors and early settlers of the California Gold Rush are laid to rest. Many who have died due to diseases, accidents, and everything in between are buried within these grounds. This cemetery has a mix of unmarked and marked graves. But make no mistake, the specters will make their presence known one way or another.

Records show that two teenage boys were the first to be buried here on the grounds in 1875. Soon after, many San Diego residents were quickly dying from all kinds of causes. The need for a burial ground was dire and the land that now inhabits the remains (and spirits) of many was the solution. 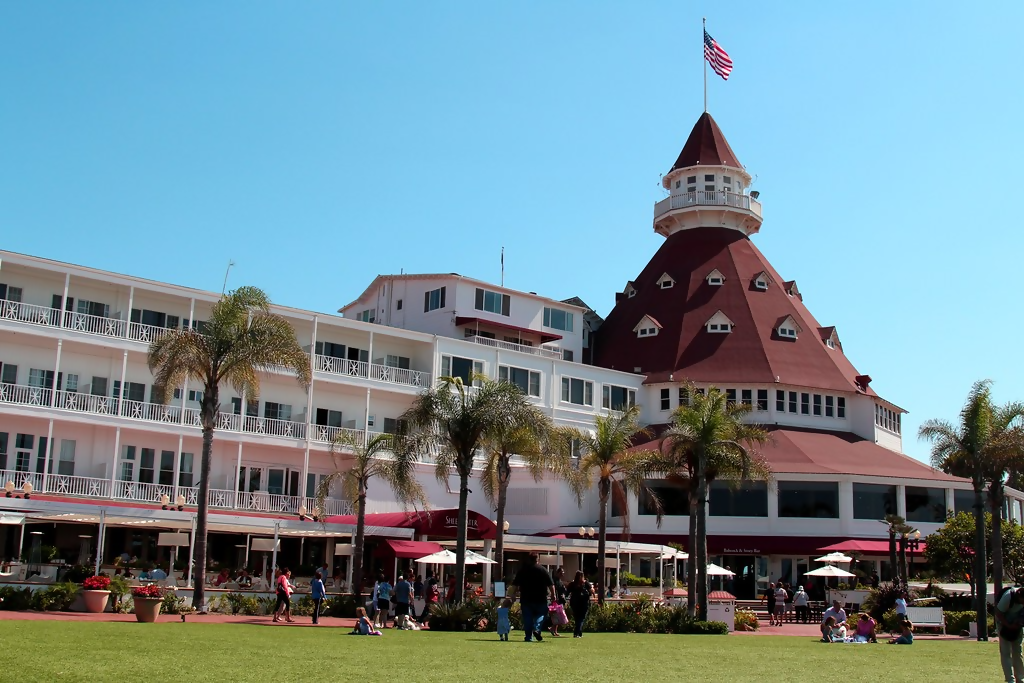 What is it with ghosts and hotels? The answers may vary. But it further proves that the tourists from all over are not the only ones filling up the vacancies at hotels like the Del Coronado. One of the most gruesome scenes that have happened at the hotel was a suicide of a young woman who might be known to many as the “Beautiful Stranger”. That stranger was known as Katie Morgan. In 1892, she checked into the hotel under an assumed name. She was never seen again until the discovery of her body a few days later. It was said that she committed suicide after being stood up by a potential love interest.

Her apparition is said to be sighted by visitors of the hotel and even in some of the rooms close to where she died, Room 302 (now Room 3327). Unlike most specters who like to cause trouble and take their spooking abilities to a new level, the Beautiful Stranger herself is just out and about. She’ll mostly keep to herself and not cause so much trouble (other than making someone feel a little chilled). 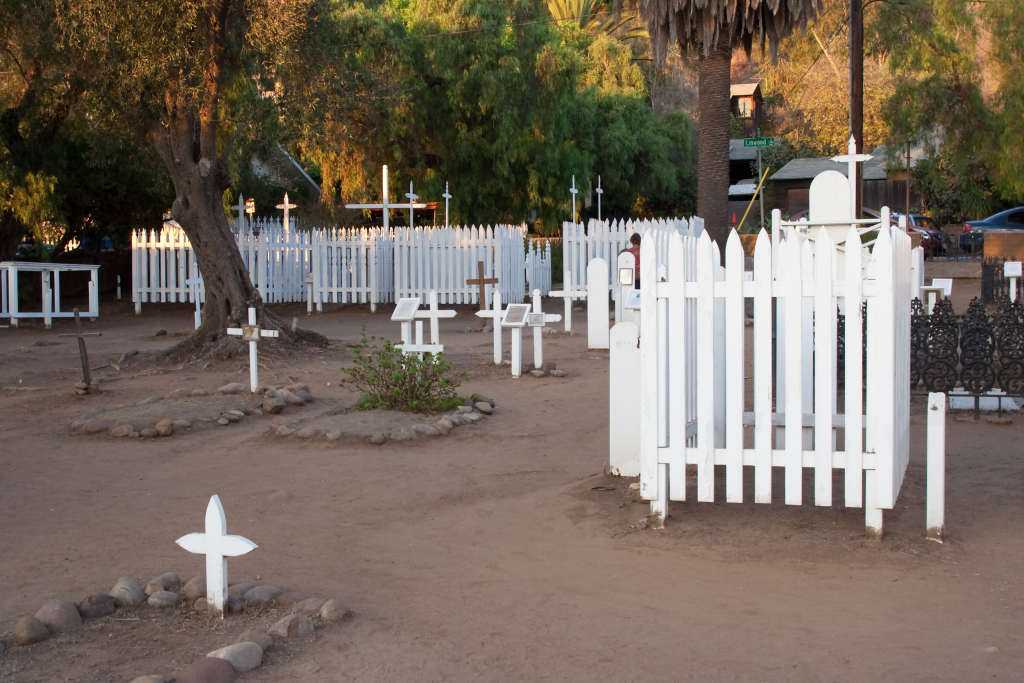 It appears that we are going back and forth between hotels and cemeteries. It may seem commonplace in San Diego of all places. The El Campo Santo Cemetery is just a mere two blocks to the south of a famous haunted place in the city. In case you forgot by now, it is the Whaley House. This cemetery is the final resting place of many of San Diego’s early settlers. Among them include Juan Mendoza, a rancher who was shot to death by a soldier and a young girl named Anita Gillis, who succumbed at the age of nine to scarlet fever.

Other than the sight of apparitions walking and standing around the cemetery grounds, visitors have often seen glowing orbs in the distance or close by. There may even be some spots on the cemetery grounds that may seem unusually cooler than normal. Visiting here might be a place that can guarantee that once you leave, you’ll still feel a certain chill in the air. 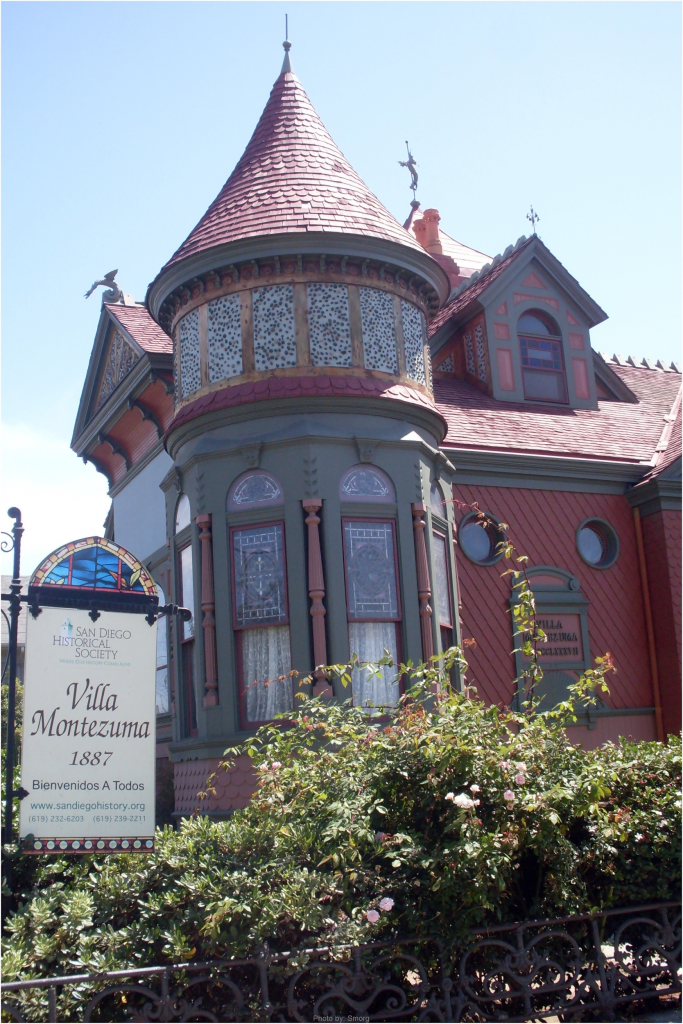 The Villa Montezuma might be haunted. But some beg to differ and call it “enchanted”. Why exactly? Because one of the residents was a piano player who played many classical pieces from Mozart, Beethoven, Bach, and many other composers of ages past. Jesse Sheppard was a pianist by enjoyment. So it would be safe to say that he died doing what he loved in this very home. Specifically, Sheppard was believed to be found dead in a seated position in front of his beloved piano.

The spirit of Sheppard is said to have been spotted a few times over the home’s near 130-year history. Every year up until the fall, tours of the Villa Montezuma are open to the general public.

Click To Join Our Haunted Monthly Newsletter! Stay updated on stories of hauntings and intrigue!