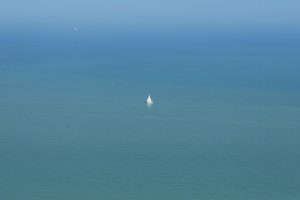 A touchy and sometimes unbearable subject in Western culture, cannibalism has played a role in human civilization for thousands of years. Ranging from ancient tribal customs in South America to survival instincts in disaster situations, the consumption of another human being seems so ‘out there’ and brings about the statement ‘I would never do that.’ Truly, one cannot make that claim until they are in a situation where their life hangs by a thread.

The following story tells of a case of cannibalism at sea, on a yacht known as The Mignonette. It was a decent-sized boat, 52 feet in length, but it was designed and intended for only inshore sailings, not long distant voyages. Australian lawyer Jack Want bought it in 1883 for leisure, and to show off to his friends (and enemies) alike. On May 19th, 1884, it was sailed from Southampton to Sydney, a trip of about 13,000 nautical miles. Jack wanted to have the yacht shipped to him for a low cost by sailing it there, so he hired a crew consisting of Tom Dudley (the ship’s captain,) Edwin Stephens, Edmund Brooks, and Richard Parker, the 17-year-old cabin boy, who was an orphan and an inexperienced seaman.

Fate in the Hands of Your Mates

The four set off that day in 1884, not knowing that their fates were sealed once they left port to Australia. On the 5th of July, the yacht was running northwest of the Cape of Good Hope. The vessel was clearly struggling and shortly after the crew turned in for the night, a large wave struck the yacht and washed away the lee bulwark (a strong defensive wall.) Captain Dudley realized then that the yacht was doomed and ordered the only lifeboat, a flimsy 13-foot dinghy, to be lowered. The Mignonette sank within five minutes of being struck, and the crew abandoned ship, managing to only salvage vital navigational instruments, along with two tins of turnips. No water was brought on board the lifeboat. Dudley managed to improvise a sea anchor to allow the lifeboat to maintain stability.

Over the first night, the crew had to fight off a large shark with their oars. They were about 700 miles from the nearest land at that time, and Dudley kept the first tin of turnips until the 7th of July when the five pieces inside the can were shared among the men to last them a few days. A couple of days later, a turtle was spotted and dragged on board to eat. The crew resolved to avoid drinking seawater as it was known to cause extreme dehydration which could lead to hallucinations, convulsions, and painful death. The turtle held them over until the second and the last tin of turnips was opened on the 15th of July. The crew had failed to catch any rainwater and resorted to drinking their own urine to try and stay hydrated. It’s estimated that around the 20th of July is when 17-year-old boy, Richard, fell ill, from experimenting with the consumption of the saltwater.

A tradition of sailors, ‘drawing lots’ was a way to choose a sacrificial victim who would be chosen to die to feed the others in case of a marooning or shipwreck. This was a ‘custom of the sea’ and was a lot like the drawing of straws. Research pinpoints this discussion happening around the 17th of July, and debate seems to have intensified around the 21stwithout any resolution. On the 23rd of July with Parker in a coma, Dudley told the others that it was better for one of them to die so the others could survive and that they should draw lots. Brooks refused. That night, Dudley brought it up again, and with hunger pangs increasing, he told the other men that since Parker was already in bad shape, and since they had wives and children to come home to, that Parker should be the sacrificial lamb, so to speak. The matter was dropped and left until morning.

The following afternoon, under a baking July sun, Dudley and Stephens agreed that Parker would be killed. Killing Parker before his natural death would allow them blood to drink, a rare source of the water they so desperately needed. Dudley said a prayer, and with Stephens holding Parker’s legs, he pushed his penknife into his jugular vein, killing him. Dudley later described the scene, “I can assure you I shall never forget the sight of my two unfortunate companions over that ghastly meal. We all were like mad wolfs who should get the most, and for men—fathers of children—to commit such a deed, we could not have our right reason.”

Only four days later, on the 29th of July, another ship was sighted, the German sailing boat Montezuma picked up the survivors and returned them to Falmouth, Cornwall on the 6th of September. On their arrival, they entered statements under the Merchant Shipping Acts, in the event of a shipping loss. All three believed they were protected by law under a ‘custom of the sea,’ which would defend their act of cannibalism since it was necessary to their own survival. A police Sergeant was nearby and overheard the statement given to the customs officer. He later approached Dudley and questioned him about the means by which he has killed Parker, taking custody of his knife. While the men were making arrangements to rejoin their families back home, the sergeant advised that the men be detained.

A warrant was later attained for the men’s arrest for murder on the high seas, and the three men were held in the station until they were set to appear before the magistrates on September 8th. Dudley was confident that the magistrates would dismiss the charges. Prosecution soon laid in the hands of Sir William Harcourt, who believed that the men had taken advantage of a minor at sea and murdered him. Soon, the story reached the public, and even Parker’s own brother, who was also a seaman, stood on the side of the defense, claiming they did what needed to be done. The three men were granted bail and returned home to their families until the 18th of September when they would face the bench. Harcourt became revolted by the public’s sentiment with the men and was even more intent on a conviction.

On their day of judgment, it was stated that there was no law that said that necessity was a defense to murder. The case itself had too many roadblocks, as the only witnesses of the event were the three men being held accountable, and that there was no evidence, as the body for the most part had been consumed. They were granted extended bail, and records do not show any final ruling for the men. No evidence was brought to trial, and no witnesses lay on the side of the prosecution. The men were still found guilty, though they were not the first seamen to resort to cannibalism. What made them distinct, however, was that they had abandoned the custom of the sea by choosing which man would be killed and eaten—a hubristic decision that defied the sailor code. But with lack of evidence, they were pardoned shortly thereafter conviction by the home secretary and were released from prison within six months.

An extremely strange coincidence, the tale of Richard Parker has a literary connection. Years before The Mignonette ever set sail, Edgar Allan Poe wrote an 1838 short-story where a character, by the name of Richard Parker, is eaten by fellow stranded sailors after hunger sets in.

What Would You Do?

So, what do you believe? Were the men right to sacrifice their weakest member to ensure survival for the majority? Should they have just waited, not knowing that their rescue was to come only four days after? Would you be able to knowingly eat a crewmate to save yourself? It can only be imagined the terror felt and the lack of hope that was running rampant on that small lifeboat. The men reassured themselves that Parker was going to die soon anyway, and decided to take his life to save themselves. It’s hard to say what the ‘right’ decision would have been, as most of us have never been in a situation such as this. The only thing for certain is that the thought of that day will live on in the survivor’s minds and hearts until their passing when maybe they will see young Richard Parker again, and thank him for his sacrifice.