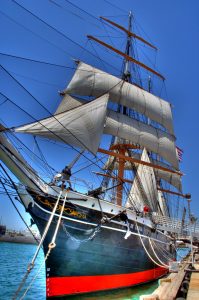 A ship full of entities, the Star of India, the oldest working sailing vessel, is an 1863 iron sailing ship. It was previously known as ‘The Euterpe,’ which is the Grecian muse of music. A gorgeous name for a magnificent ship. Star of India had a long life as a merchant ship, hauling cargo and transporting immigrants. It has a plain bow with a large stern filled with windows. The original ship, The Euterpe, was known as a full-rigged ship, which meant three or more masts, all square-rigged.

The Euterpe was modernized by new owners in 1901 and was given a more up-to-date sailing system. The system resulted in better all-around performance with smaller and less skilled crews. The top inside level of the Star of India housed her captain and his top crew, the captain’s office, and the eating quarters. Other crew and passengers were accommodated in between the top and bottom levels, shoved in particularly close quarters.

The Euterpe was built in the shipyard at Ramsey in the Isle of Man, England, in 1863. She was one of the very first vessels made of iron, unlike her sisters, which were comprised of wood. The company that built The Euterpe immediately put the ship on the water as an Indian jute trading ship. Her first voyage was anything but smooth, as a collision and an attempted mutiny occurred!

Her second voyage was not much better; a cyclone surrounded The Euterpe in the Bay of Bengal, twisting the boat around in extremely choppy and dangerous waters. The cyclone’s winds ripped away at the topmasts, leaving her limping back to port, the masts needing to be removed. Stress filled the ship and got the best of her captain, who died on board soon after the accident.

After four more voyages, these ones relatively uneventful, The Euterpe was sold in 1871 to the Shaw Savill Line of London. After the transfer of ownership, her next twenty-five years were spent transporting immigrants to and from New Zealand, Australia, California, and Chile. A total of twenty-one trips were made, throughout all kinds of seas and all kinds of weather. The Euterpe, less than ten years old, had been through a lot of strife and stress.

In 1894, The Euterpe was chartered by a polar explorer Archibald Campion, for his quest to the arctic. He picked The Euterpe because of her iron hull, which would stand against the ice chunks of the arctic sea. The ship also had a crew and cargo hold. Interestingly enough, Campion brought along an invention he had been itching to try: an electric motor that would allow the crew to power the ship through the ice as well as provide the crew with light and heat aboard the ship. She trekked with Campion until four years later when she was sold to an American company, Alaska Packers. With this company, she began her life carrying fisherman and cannery workers, bringing back canned salmon to Oakland, California. With Alaska Packers, she was renamed: Star of India.

By 1923, sailing ships were slowly being replaced with more reliable steamships, so the Star of India was finally put to rest and taken out of service. The future for her looked pretty grim until a group of residents in San Diego raised $9,000 to purchase the Star of India, having her towed to San Diego in 1926. A colossal restoration was planned, and high hopes were had for the historic vessel. Unfortunately, the Great Depression hit, followed by WW2, and the plans for the Star of India were laid to rest.

Thirty years went by, and the Star of India sat ashore, deteriorating into a shell of what she once was. However, her fate changed in 1957 when an experienced windjammer skipper came into San Diego on a speaking tour. Captain Alan Villers witnessed the sad state of the ship, letting all of San Diego known just how upset he was with the state of the Star of India. He was surprised that a ship this beautiful was neglected for three decades, and with his guilt trip, a fund was established to collect money for its restoration. Thanks to Captain Villers, the Star of India was fully restored to her former self and was even made seaworthy again. In 1976, the ship was sailing around while an audience sat in awe. A group of volunteers now run the ship, taking her sailing about once every year. It sounds like a mostly happy life and ending for the Star of India, so how in the world could this ship be so haunted?

According to pretty much anyone involved with the Star of India, including the ship’s staff, San Diego Visitors Center, paranormal researchers, and even visitors to the ship, believe wholeheartedly that some of the entities aboard have never left and don’t intend to.

While we expect deaths on ships that have seen battle, we so easily forget that illness, accidents, and deaths occur on working vessels even more. Sailors lose their footing, diseases from travel, moments not fully aware can mean the difference between life and death when out on the dangerous, open ocean. People did die while working onboard the ship… but who were these souls in life?

Names to The Hauntings

We should start with the eldest known entity, a young man by the name of John Campbell. It is told that in 1884, a young John, then a teenage boy, was seeking adventure and stowed away on The Euterpe, unknown to anyone. He was eventually discovered and immediately put to work to earn his place aboard. While tending to the hundred foot-tall masts, his foot slipped, and he plummeted to the deck below, breaking both of his legs. He passed away three days later on board, wincing in pain until his final breath.

These days, visitors who stand near the mast where he fell report feeling a freezing hand, perhaps warning them to keep their feet on the ground and away from the mast.

Another spirit is nameless but is said to be a Chinese crewman that was in his locker area just going about his business. Crew members above deck started the machine to raise the anchor, and the anchor chain slowly filled the storage locker, crushing the crewman to death. No one was able to hear him pleading to stop the chain since the machines were so loud. A persistent cold spot lives on in the storage locker, and staff believes it is this crewman making sure his presence is known since he was ignored in his final moments.

Throughout The Euterpe’s years in service, some crew members suffered terrifying accidents and fatal illnesses, cramped inside crew’s quarters with the men they had grown to see as family. A sense of anxiety floats about the ship, and the crew’s quarters holds an especially cold aura, noticed by all who enter.

The Star of India was visited by Ghost Adventures, where the crew experienced almost all of the claims and entities listed above. It seems as if the ship is a safe haven for these wayward spirits, so intent on living their lives on the open ocean. It’s truly a paradox; they craved freedom in life and are trapped aboard what was their ticket to liberty in life. If you’d like to visit the Star of India for yourself, she is docked at 1492 North Harbor Drive in sunny San Diego, California, at the Maritime Museum. The immense size of the ship herself is enough to elicit a gasp, but once aboard, the spirits will be sure to give you a real show. For another haunted ship, check out our article on the Berkeley Steam Ferry Boat! 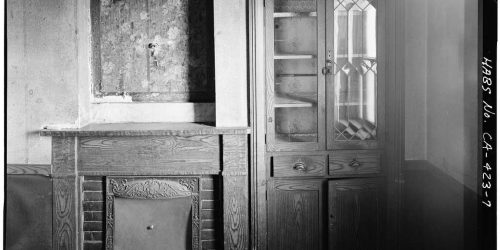 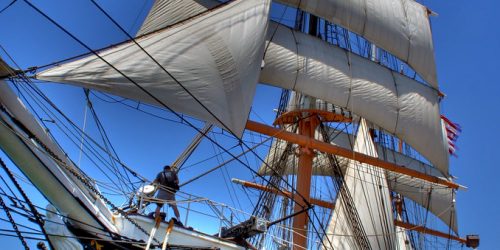 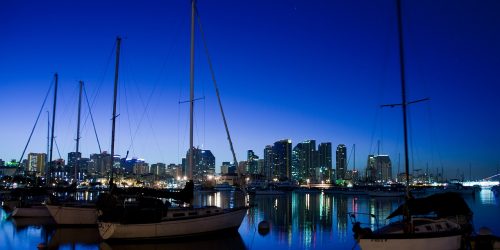