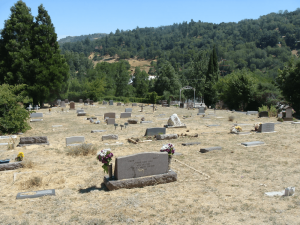 With the search for gold came also death; such is the history behind the Julian Pioneer Cemetery. Burial grounds like these are becoming more decrepit with each passing year, and this one is no different.

Perhaps its rustic atmosphere is the compelling force behind the many people it seems to draw in on a yearly basis. Visitors come from all over to experience its unsettling vibes. And with a curiosity in the dead that has reached an all-time high, Julian Cemetery is the perfect place to satiate such desires.

From the moment you set foot on its hilly grounds, you feel as if you’ve stepped out of time. Above and around the steep cemetery lie the very hills that attracted pioneers to toil for gold so long ago. The gold rush from the mid-1800s brought over a quarter of a million prospectors to regions like this, with some of those men and women even buried here. 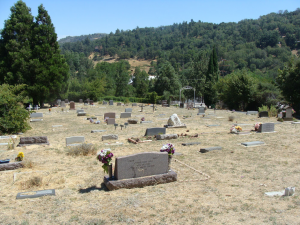 Throughout the pioneer cemetery, unorthodox markers are littered amongst its grounds. Crude hunks of rock with hand-carved names and dates provide some insight as to how destitute some of buried were when laid to rest here.

A plaque at the cemetery sets the tone for the deceased. It reads:

“Primitive living conditions, violence, alcohol, disease and fatal accidents, all common in the Julian gold mining district, created an urgent need for a graveyard. Such use began on this then private property with the burial of stillborn babies under a sheltering oak tree.

The earliest burials recorded are those of two teenage boys who died in the winter of 1875. Soon other victims were buried, some “with their boots on” in unmarked graves, some in family plots and some alone in what became, in fact, a community cemetery.” – Julian Historical Society

Goodness, what a somber setting. Not that all cemeteries aren’t so, but the conditions leading up to their deaths paint a pretty clear picture as to what life was like in those days.

Upon entering the Julian Pioneer Cemetery, long, steep steps with old wooden railing set the stage for the challenging hike that lay ahead. Above is an equally archaic archway that welcomes you onto the grounds. 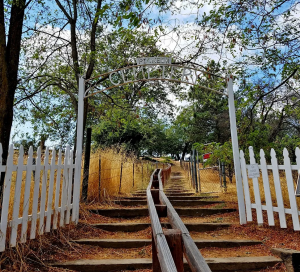 Getting to the peak of the cemetery is no easy feat, but once reached, the view provides a satisfying overlook. From atop its cragged ground, you begin to get a sense of just how difficult life was for the early settlers and pioneers that once inhabited these hills – and are now laid to rest in them.

With little more than grit and ambition, many of them set out in the hope of striking it rich; never again having to work in order to provide for their families. Unfortunately, in doing so, many lost their lives under such befouled living conditions while out in the rough.

Perhaps Proverbs 10:2 would have warned them when it states that “ill-gotten treasures have no lasting value, but righteousness delivers from death”.

There’s Gold in Them Thar Hills… and Death

Dying on the hills during the gold rush was a hard way to go. Lawlessness ran rampant, and of the 300,000 who came in search of earthly treasure, a large majority of them died during their trek. Many simply weren’t used to such difficult living conditions when they migrated to the hills in search of gold.

The disease killed several, some lost fingernails from the constant digging, and others developed gangrene. Malnutrition wiped out many who came unprepared for the harsh environment, but others were murdered over the greed that permeated the atmosphere.

Indeed, it was a raucous time for those who dared to enter this vicious territory. Over the next 20 years, more and more potential miners would come to inhabit the land, serving to compound the already thick tension.

As unpleasant as the gold rush was, some did find it worth the hardship. Beginning in 1848, well over a billion dollars(!) was pulled from the ground until 1857, after which it leveled off to a paltry $45 million a year.

By the time all of the surface gold had been extracted by individuals or groups, the land was so overcrowded that violence upon one another was just as common as the gold once was. Seeing the writing on the wall, some of the more industrious types went to earn money by working for mining companies that had tools capable of doing far more than any mere man.

Utilizing hydraulic mining equipment, these companies were able to extract an additional $170 million from the hills. However, all of this greed for gold proved harmful to the very land that provided it. Disruptive sediments destroyed farmlands down below the hills when they washed downstream.

The landscape had become so devastated that the government finally had no choice but to intervene. In 1884, a court ruling brought a swift end to the use of hydraulic mining equipment, returning agriculture as the driving force behind California’s economy.

With farming being the choice method of earning a living prior to the rush, many farmers had found themselves unable to provide for their families as a result of the gold craze. This further compounded difficulties in the food economy by promptly halting the usual influx of goods and services.

Merchants, meanwhile, made a killing off of would-be miners who flocked to California. By providing goods to the ill-prepared, sellers were able to recoup some of their losses if they normally sold foods and dry goods.

Although the self-centered days of the gold rush are well behind us, the Julian Pioneer Cemetery stands as a reminder of those harrowing times. Almost as if frozen in time, these burial grounds are said to be inhabited by many spirits that lived during the rush.

Several visitors have attested to seeing wandering pioneers who appear stuck within the grounds. Dressed in 19th-century attire, apparitions have been captured drifting throughout the hills and around gravestones. Extreme drops in temperature at certain spots have alarmed many, possibly the sign of a supernatural force at play.

Since the founding members of Julian are buried at this cemetery, ghost-hunters and paranormal investigators believe that they watch over their graveyard to ensure that it is respected by outsiders, or more precisely, the living.

These are grounds that sadly have not been respected by some who have visited them. While they are indeed nearly two centuries old, they no doubt would not look as bad as they do had everyone who visited taken care of the gravestones when doing so.

And yet, perhaps this is the reason why those long-dead still roam the cemetery to this very day.

San Diego, California is a well-known hot spot for otherworldly activity. Its history is such that poltergeists inhabit locations far and wide, and the California Gold Rush did nothing to reduce such hauntings.

The greed found within the California hills resulted in countless deaths; all in the search for gold. The Bible once again needs to be quoted here. “For the love of money is the root of all kinds of evil”. – 1 Timothy 6:10.

Had potential prospectors not migrated to California in search of its buried gold, the Julian Pioneer Cemetery may very well not be here today. Its burial grounds are the result of the living conditions brought on by the frenzied rush, serving to expedite death.

While the cemetery has fallen by the wayside in recent years – largely due to disrespectful tourists – it is hoped that care will be given to it anew, keeping its memory alive for future generations to appreciate its hallowed grounds. If you happen to take a journey to the Julian Pioneer Cemetery, be mindful of your surroundings while visiting. You never know what you just might see.