Ah, yes, the Hotel del Coronado. Boy, does it have a story to tell. This “hotel of the crowned” is aptly named, as guests can today expect to spend anywhere from $600 to $3500 a night for any of its 757 rooms. Built in 1888, this extravagant hotel has been visited by many notable stars throughout its time, like James Stewart, Babe Ruth, Brad Pitt, and Keanu Reeves, just to name a few.

Presidents of our great nation have also stayed here, like Howard, Taft, Kennedy, Carter, and Reagan. For a hotel to attract no many famous names, it surely must be quite the experience. Indeed, its legacy is such that it has been used in no less than 12 films, like The Flying Fleet, and Some Like It Hot, which starred Marilyn Monroe, Jack Lemmon, and Tony Curtis.

Other notables filmed here are The Stunt Man, starring Peter O’Toole, and My Blue Heaven, with Steve Martin and Rick Moranis.

Wicked, Wicked, a horror flick from 1973, was completely filmed on location at the Hotel del Coronado; the hotel in the movie went by the name, The Grandview, however.

More recently, the hotel served as the primary filming location for the feature film Daydream Hotel from 2016.

Movies aren’t the only form of media to use the hotel’s services; several books have, as well. Many authors have stayed within its rooms in order to find solitude to aid in the writing of their literature.

Different television series, too, have used the grand hotel in their presentations. Baywatch has used it in storylines on a few occasions, as well as NBC’s Ghost Story.

To be so wildly popular among some of the elite, the Hotel del Coronado is high on the list as one of the most luxurious places to stay in all of the country. Being the second largest wooden structure in the United States validates as much.

If its stunning beachfront location, Victorian architecture, and Four Diamond rating aren’t enough to convince you of its splendor, look no further than the hotel’s interior to win you over.

Great care and consideration are taken into keeping the Hotel del Coronado fresh and contemporary. It is continually upgraded in order to stay with the times.

The rooms truly are rather beautiful to behold, but the history behind them? Not so much.

Let’s roll back the clock to the year 1892 to get a better understanding of why that is. Just four years after opening its grand doors, the Hotel del Coronado was paid a visit by a young gal named Kate Morgan.

Kate, who was only 24-years-old at the time, checked into the hotel on Thanksgiving Day of 1892. For whatever reason, she used a fictitious name. After staying in her room for a few days, she was found dead on a nearby staircase. What could possibly have happened? She was only ever seen by herself, this much was sure.

After police arrived, the hotel staff was questioned to try to determine what lead to Kate’s death and who she even was, as no one knew her real identity at the time. Checking the name she had given to front desk, police determined that she was not the woman she had claimed to be.

San Diego County police telegraphed a description of the young lady to police agencies around the United States in an effort to positively identify her. Newspapers soon picked up the story, further broadening the scope in solving this mystery.

It wasn’t long after that the San Diego County police department was finally contacted by Kate’s estranged husband. From there, he positively identified who she truly was and the investigation soon became easier to solve.

It was surmised that Kate went to the Hotel del Coronado to meet her lover, as she was having an affair – a deed highly frowned upon in those days. Had she been discovered in doing so, she would have been shunned by society, hence the false name given to hotel staff.

After waiting five days in her room for the lover to show, when he never did, her remorse had time to sink in and she took her own life by a self-inflicted gunshot wound. Personally, I would have given up after five minutes, but to each their own.

Kate’s story isn’t the only tragedy to befall the Hotel del Coronado. Just 12 years later, vaudeville stage actress Isadore Rush drowned at the hotel’s beach in 1904. She was only 38-years-old.

These events have lead many guests and hotel staff to claim that the establishment is haunted.

The Haunting of Hotel Del Coronado

Numerous incidents of patrons seeing the apparition of a young woman have been reported. Commonly referred to as “The Beautiful Stranger”, she is most often seen in the very same room that Kate had stayed in, #3327 (then #302). 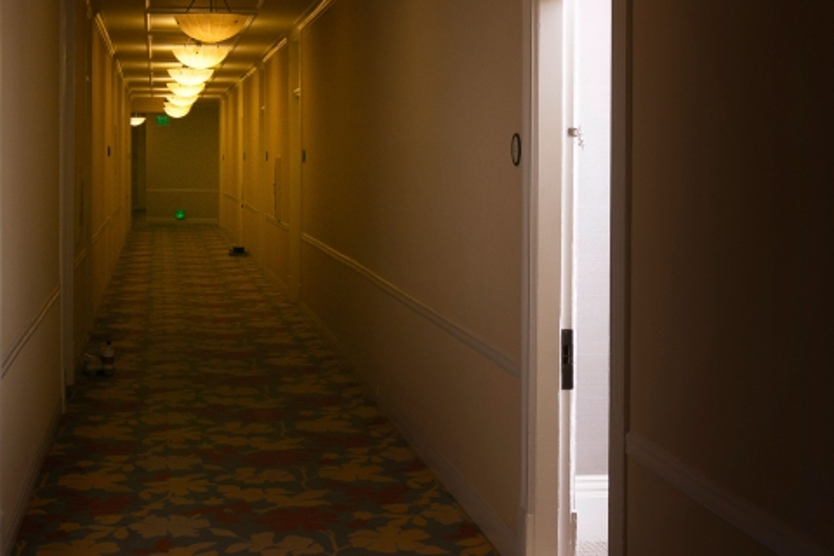 So often are supernatural occurrences that a Hotel del Coronado historian keeps record of every guests’ encounters.

Soft footsteps walking around hotel patrons’ beds have been reported, as well as the moving of physical objects. Several instances of pillows being stacked in a pyramid are said to have happened.

While Kate’s spirit is mostly reported as lingering in her old room, it’s also fairly common to spot her strolling through the resort’s garden, along the beach, and down its hallways.

Visitors have said their televisions will turn on at will, as well as their lights. These events are usually accompanied by light breezes, scents of perfume, and disembodied sounds.

A gift shop within the Hotel del Coronado features many memorabilia from Marilyn Monroe’s film, Some Like It Hot, which if you remember, was filmed at the hotel. Employees and guests alike have personally seen this memorabilia fall off the shelving and racks and onto the floor. Staff simply feel that either Isadore or Kate don’t like to share the spotlight.

Perhaps most eerily of all, these final two accounts are enough to make your skin crawl. On Valentine’s Day of the year 2000, couples reported their bedsheets being ripped off of them in the middle of the night.

Just recently, one gentleman checked into the hotel like any other day. He put his luggage and belongings on his bed upon entering the room, and before unpacking, went in to use his bathroom. When he came out, all of his suitcases were open and his clothing and belongings were strewn all over the room!

It’s reported that the gentleman simply asked to be placed into a different room, which really says something for the hotel’s splendor. Most folks would leave and never return at the sight of a demonic disturbance.

From movies to books to television and even postage stamps, the Hotel del Coronado has been the subject of many stories; both fictional and true. But it’s easy to see why; the place is absolutely breathtaking. So much so that is has attracted the attention of many celebrities, presidents, and royalty over its many years in operation.

But it has also attracted many ghost-hunters and paranormal investigators for different reasons altogether. And there must be some pretty compelling evidence to garner so much attention. The accounts told and the frequency in which they are reported are such that it’s hard to refute.

Something is definitely going on within this historical landmark. Perhaps Kate will never leave the hotel. Perhaps she will forever torment those who stay in her room. Perhaps there’s something much deeper going on when Kate makes her presence known, as if she’s trying to warn those to whom she reveals herself.

Either way, it doesn’t seem like her actions are doing anything to keep patrons from staying; the Hotel del Coronado continues to bring in more and more visitors with every passing year.