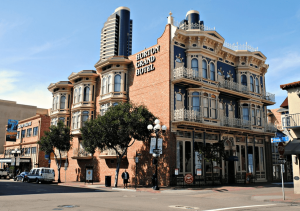 Built back in 1887 by architects Comstock & Trotsche, the original Grand Horton hotel was part of a building boom that followed after San Diego opened their first transcontinental railroad connection in 1885.

This was an industrious time for San Diego, with old established settlements growing exponentially in the following years. Investors were wise to see the attraction from outsiders and were quick to begin expanding on what was already there.

The Grand Horton being one of those wise investments, the hotel remained in operation for many years until it was decided to tear it down the following century. 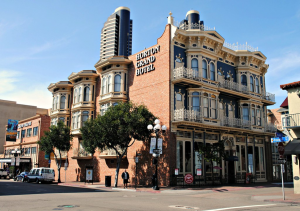 History of the Hotel

The Horton Grand Hotel gets its name from Alonzo Horton, who was instrumental in San Diego’s growth. Alonzo had bought land in the late 1800s with the hope of building a new city that was closer to the bay.

When William Heath Davis’ initial attempt at settling a colony failed, Horton soon followed in his footsteps with an equally ambitious vision. While Davis had heavy investments in the first steps toward building a city, he received much pushback from surrounding settlements, Horton was more widely accepted, allowing his vision to flourish.

Building upon Old Town, Alonzo grew what was then called New Town into a bustling, lucrative city, eventually becoming what we now call San Diego. In honor of Horton’s great achievements, many things in the area are named after him, like the Horton Grand Hotel.

When the city of San Diego purchased the hotel in the 1970s, great care was taken to ensure that as little was wasted as humanly possible, as they were planning on reusing much of the material for a new hotel.

In doing this, they systematically had the hotel dismantled brick by brick. Using a numbering system for each, these same bricks were used in the construction of the new “Horton Grand” hotel.

But the Grand Horton wasn’t the only hotel that needed to be rebuilt. The nearby Brooklyn-Kahle Saddlery Hotel, which was named after its prominent saddle and harness shop on the first floor, was also set to be destroyed.

From that came the idea to combine both the Grand Horton and the Brooklyn-Kahle into one magnificent, luxurious hotel for all of San Diego to enjoy.

With such a rich history behind both hotels, historians successfully lobbied to have them saved in an effort to retain San Diego’s past.

As a part of San Diego’s historic Gaslamp District, the Horton Grand Hotel stands as a beautiful echo to remind guests of the city’s monumental expansion over the years.

The Gaslamp is historical in that its method for lighting the city was unique for its time. Not actually gas at all, lights were powered by a form called arc lighting, where a lamp produces light by way of an electric arc. Old San Diego widely used this method in the Gaslamp District and remains historical to this day for that reason.

This is just another of the many reasons why so many people wanted to preserve such history when it came time to rebuild sections of San Diego. Although great structures like the Grand Horton and Brooklyn-Kahle hotels were torn down, their presence remained by incorporating some of their past designs into the new and improved ones.

As stunning in design and scope as this great structure is, however, its history is not all charm and elegance. Legends of cheating and murder are littered throughout its past, serving to make it a hot spot for paranormal activity to this very day.

Read ahead to learn exactly what makes the Horton Grand so intriguing that people from all over the world come to visit.

The Haunting of the Horton Grand

Over two centuries ago, a gambler by the name of Roger Whitaker began his stay at the Horton Grand Hotel just like any other guest. He checked in, took his belongings to room 309 and headed out to a bar to have a few drinks.

The problem with Whitaker was that he was a cheater and a heavy drinker. These two attributes did not bode well for him, especially while staying at the Horton Grand. 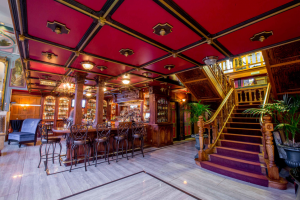 During a card game at a nearby dive, Whitaker was discovered to have cheated. When he couldn’t pay up, they threatened his life. Firing a shot at him and connecting, Whitaker fled back to the Horton Grand and into his room so that he could hide in its wardrobe, hoping to escape the very men that he had cheated.

This was not the first time he had attempted to cheat these men, which only served to make matters worse than what they already were.

His hiding did him no good, as his creditors had chased him into his room, shooting him to death while he cowered in the wardrobe.

Room 309 has long been considered a hot spot for hauntings and similar strange occurrences. Over the years, guests have reported that their bed was shaken while they slept. This has happened to so many people and with such force that it scared them right out of their room.

Others have told hotel staff that their lights flicker, or just turn off and on at will. Adding to the room’s frightening atmosphere have been accounts of items in its bathroom moving around all on their own.

And that wardrobe that Whitaker hid inside? Its doors are said to violently swing open at random!

Guests and staff both agree that Roger Whitaker is haunting the room to this day, sure to scare off anyone who dares to stay in room 309.

Another (in)famous apparition of the Horton Grand Hotel is that of a woman known as Ida Bailey. Ida was once the owner of a brothel upon which the new hotel was built.

This fact doesn’t seem to bother the spirit of Ida, as guests have reported her presence is of a friendly nature with no malice to be found. She often appears as a white translucent mist or one of the many cold spots that are felt throughout the hotel. She even has passed through guests’ bodies as they walk the halls.

It’s been accounted for by many that apparitions dressed in 19th century attire regularly wander the hotel. When present, these poltergeists will make lights turn on or off, along with carrying on a conversation among themselves.

They have been seen floating down staircases, wandering through halls, and even residing in guests’ rooms as they please.

Other less ominous experiences are those of phantom footsteps, room doors opening and closing on their own, and disembodied laughter when no other living person is present.

Today, the Horton Grand Hotel offers some of the most beautiful rooms and suites available in Downtown San Diego. Draped with Victorian-era elegance, guests of the Horton are sure to be pleased with such luxurious accommodations.

But with its dark past and often reports of hauntings taking place within, it has attracted the attention of ghost-hunters who flock to the hotel from all over the world in an effort to possibly record some of the paranormal activity.

San Diego as a whole has become a hotbed for such happenings in recent years, with anything from restaurants to cemeteries reportedly haunted. And with such a huge following of people who are passionate about such things, it will no doubt remain active for many years to come.

With the Horton Grand Hotel being a part of San Diego’s Gaslamp Quarter, it is just as important to preserve its unique heritage by paying the hotel a visit.

If you are ever in the area and don’t think you’re afraid of ghosts, give it a try. Just don’t stay in room 309!