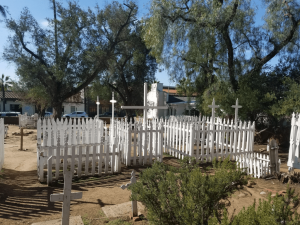 At only half an acre in total size, El Campo Santo, or the holy field, is one of the smallest cemeteries you’ll find in California. About the size of a small gas station parking lot, it is comprised of white wooden crosses throughout, with certain plots boxed in by picket fences. A low brick wall serves to line its perimeter.

Built in 1849, El Campo Santo has the regrettable distinction of being located just around the corner from San Diego’s infamous Whaley House. This alone is enough to lend to the cemetery’s haunted lore; unfortunately, it doesn’t end there. 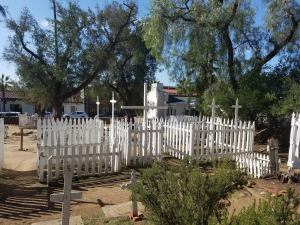 El Campo Santo used to be a much larger burial site, with many who lived during San Diego’s pre-industrial days laid to rest there. However, many of the graves were unceremoniously covered over by roads and housing in order to accommodate the ever-expanding city.

Although the cemetery is now considered a historical landmark, this status seems to do little to dissuade hauntings. Considered by many to be one of San Diego’s most haunted locations, the events that presently occur in and around El Campo Santo seem to validate the spirits’ displeasure for the disrespect they faced.

Perhaps most foreboding of all is the fact that the cemetery is home to James “Yankee Jim” Robinson. Hanged just two blocks away at the site where the Whaley House now sits, Robinson’s ghost is thought by many to regularly haunt El Campo Santo.

A Los Angeles Herald newspaper article from October 1873 gives us some more insight as to who Robinson was and why he was hanged. It reads as follows:

“They hailed from the early mining camps, and soon after their arrival came information of a reliable character which pointed out Yankee Jim as a dangerous character.

“It was said that he had loafed around various mining camps, and, watching his opportunity, had pounced upon miners in out-of-the-way places, murdered them and robbed them of their gold and trinkets.

“As long as he behaved himself he was not molested here. Yankee Jim was a Canadian-Frenchman, six feet and three or four inches in height and well developed physically.

“He had anything but a prepossessing appearance and was shunned by all respectable people.”

“At the time we speak of, Yankee Jim and his two companions stole a boat here in the harbor, which they afterwards deserted and turned adrift outside the Heads. Source: Archives

“It belonged to Joseph C. Stewart and Enos Wall, who found their property a few days after it was stolen, washed up on the beach a few miles down the coast.”

Not the kind of guy you’d want to meet in a dark alley, that’s for sure. The article goes on to talk about the trial and eventual execution by hanging for his theft of the boat. Interestingly, the foreman of the jury was Cave J. Couts, a name that is often brought up during San Diego ghost stories.

Couts married Ysidora Bandini, who is said to haunt what is now known as the Cosmopolitan Hotel. Before becoming a hotel, it served as the dream home built for Don Juan Bandini, who was Ysidora’s father. In an amazing twist of fate, Ysidora was one day leaning over the balcony of their home to watch a parade down below. When she leaned too far over its railing, she fell two stories and miraculously into the arms of Cave Couts, who was riding on a horse in the parade. Couts would later buy the Bandini home and turn it into a hotel.

The Haunting of El Campo Santo

Those who live and work around the small suburban cemetery regularly report strange happenings which can only be attributed to that of a haunting. Intermittent power outages occur without explanation, irritating those trying to live harmoniously with the dead.

Alarm systems start and stop at will, lights randomly flicker throughout homes and businesses; even their appliances will inexplicably turn on and off. Little annoyances like these are the norm while living by the El Campo Santo Cemetery.

What seems to be in connection with the paving over of the dead’s graves, car alarms will also engage and disengage without cause. Those who park their vehicles near the cemetery are often met with difficulty when trying to start them.

Numerous apparitions have been seen in and around El Campo Santo, gliding around directly above grave markers. Usually dressed in traditional 19th century attire, these ghosts are thought to be those of the Workman family who make up the majority who are buried here.

Extreme drops in temperature have been reported throughout the grounds on multiple occasions; a telltale sign of a paranormal entity present. These cold spots are almost always accompanied by flashes of light and hovering orbs. 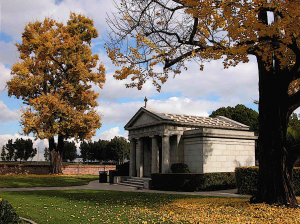 These chilling areas are said to be far more noticeable than those we have previously reported. People who have experienced them say that they are likened to suddenly walking into a freezer. This is a pretty impactful statement, as even San Diego’s coldest of months drops to just below 50°F.

On several occasions, visitors of the historic graveyard have attested to mistaking poltergeists for park employees. Upon reaching the “employee” to converse, they will suddenly vanish.

Some phantoms are seen floating around with only an upper torso – sightings that may be telling as to how the spirit died.

Many tourists have snapped pictures in and around El Campo Santo, later finding mysterious objects littered throughout their photos; objects that weren’t there previously.

An unidentified female apparition regularly glides around the south wall, sporting a white Victorian dress. She quickly dematerializes upon contact.

Reports of a Native American spirit have also been passed around. This one is said to float just an inch or two above the ground; its identity remains unknown.

Saving the best of the worst for last, the dastardly Jim “Yankee” Robinson has perhaps the darkest history of all who are buried at El Campo Santo. Overwhelming sensations are known to disturb those who wander around his grave. A tall, dark apparition thought to be his has long been seen here, standing to reason that it is indeed Robinson.

The harassment of those who live around El Campo Santo got so out of hand over the years that, in 1996, the local community got together to discuss what could be done about the mounting hauntings. After much debate, they decided the best course of action would be to employ the services of a priest.

With each member pitching in their own money, they paid for an exorcism to be performed over the cemetery. Once the exorcism was complete, they noticed a substantial drop in demonic activity. No longer are locals and tourists tormented daily as they once were.

While it’s a shame that so many sites had to be covered up during the expansion of the city, there is some appeasement for the dead. Along the sidewalks, small metallic discs inscribed with the words  “Grave Site” are embedded where the dead are buried underneath.

With these markings and the cemetery now exorcised, visitors of the community may now appreciate El Campo Santo Cemetery without the fear of being troubled by its spirits. While hauntings still occur, they are rather infrequent when compared to before 1996.

While El Campo Santo Cemetery is partially covered by modern roads and buildings, what does remain will hopefully be preserved for future generations to learn of its foundations and those who are buried there.